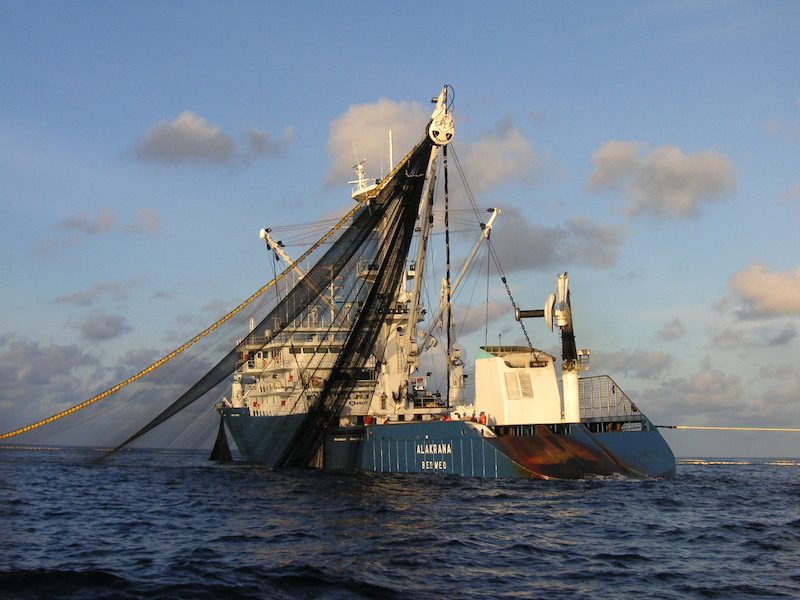 Since all international bodies assessing the status of tuna populations advice not to increase the catch of tuna the approach of the pilot is instead to improve the performance of the fishery by means of saving costs thus generating more profit fishing the same amount of fish.

Purse seine is the surface gear that contributes most to the catch of yellowfin and skipjack globally. In the purse seine fishery, three main fishing strategies are used to capture tunas: (1) targeting fish swimming in free schools, (2) targeting fish swimming around drifting objects, (3) targeting fish associated with dolphins (only in the case of Eastern Pacific Ocean), and in some isolated cases associated with whales or whale sharks. In the first approach, called a free-school set, a school of fish is identified from evidence in the water’s surface, and is captured by encircling it. In the second approach, a drifting object where fish are aggregated is encircled with the net. Within this second strategy, there are a subset of techniques including sets on encountered “natural” floating objects (“log sets”), and sets on fish aggregating devices (FADs). FADs are floating objects that have been modified and placed in the fishing areas by the fishers to attract fish, and to facilitate their aggregation and capture. Additionally, FADs are often outfitted with a buoy to help fishers locate them. The strategy of using FADs was developed in the 1980s, but greatly increased in use during the 1990s.

A deciding factor for the energy efficiency of the fishing vessel, is the ability to choose the FADs with more probability of having big or profitable tuna aggregations, combined with the best route available to visit and/or fish all this FADs in the most energetically efficient way. Such decisions are today based on the skills and knowledge of the skipper or not took in account at all, being one of the main areas to improve the profit of the fishing industry without harming the state of the stocks.

The main motivation for this pilot is: