Organisations worldwide seek knowledge to develop a competitive advantage in the Information Age, and the convergence of IoT, cloud, and big data offers a variety of opportunities. The exploitation of big data technologies could result in high costs when companies need to call upon expert analysts to help with big data analytics. I-BiDaaS aims to facilitate the utilisation of big data technologies by providing organisations with a self-service solution that will empower employees with the right knowledge and give decision-makers the insights they need to make the right decisions. Profitability and cost reduction are some of the expected impacts from I-BiDaaS, providing companies eventually with the competitive advantage they need towards a thriving data-driven EU economy.

From the beginning of the project, great emphasis has been placed by the dissemination team to create a web-based community consisting of people who can potentially be interested in applications of I-BiDaaS. Thus, the dissemination strategy focused on raising awareness, sharing knowledge, attracting potential users, and exploring future commercial use of the I-BiDaaS project. The various dissemination means include the project’s website, distribution of dissemination material, publications in journals, and participation in conferences and other relevant events. Relevant content and activities are being communicated regularly via social networks and included in the full-featured website of the project. I-BiDaaS Social media presence, as confirmed by the social media statistics as well as the website analytics, has not only enhanced public awareness of the project on the web but it has also facilitated the creation of an I-BiDaaS active community.

The official website of I-BiDaaS has so far received more than 2000 unique visitors, while almost 1050 downloads of available online material. On Twitter, our 525 tweets have reached an impressive total of 315.400 users. Additionally, as of May 10th, 2020, more than 10.500 LinkedIn users have viewed our posts. Finally, through the I-BiDaaS YouTube channel, the six videos uploaded have reached more than 2.200 interested viewers on the content presented.

Building collaboration with the BDV-PPP, and I-BiDaaS demonstrations

In addition to creating an online identity and presence, I-BiDaaS also actively collaborated with organisations, projects, and establish collateral partnerships to develop standard dissemination tools and engage into dissemination activities such as webinars, events, and publications. I-BiDaaS’s ongoing collaboration with the BDV-PPP stands out as an example of this effort with the contribution of content to the BDV-PPP monthly newsletter and active participation in significant events such as the BDVA Summit. 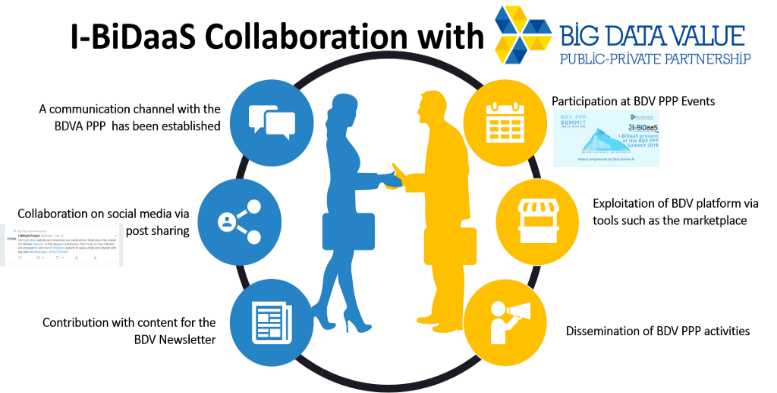 The second year of the project, intensification of dissemination activities and demonstration of tangible assets such as the MVP and the 1st prototype were presented during major events. Moreover, during the 2nd year, participation in events and the release of publications were also increased. 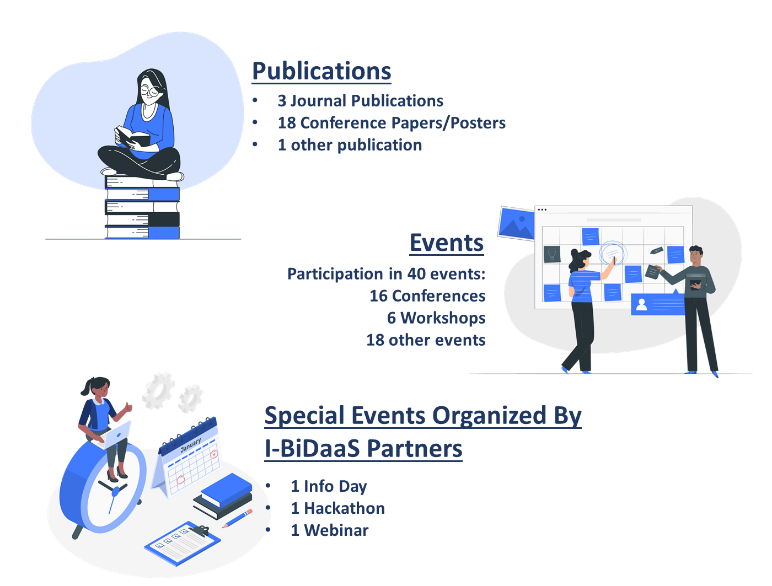 The nature of the I-BiDaaS project requires designing new and innovative businesses that often include complex interconnections and interoperable dimensions. ENPC, as leader of the exploitation, sustainability, and business continuity, via its Business School, utilised a dynamic business model (DBM) approach in view of enabling the I-BiDaaS solutions to reach the market. The framework was developed by the Dean of the Business School and the exploitation manager of the project, Mr. Alon Rozen.

The model follows the Lean Innovation philosophy of designing, developing, and bringing a product to market via scalable solutions that create, distribute, and capture value in a minimum amount of time and at a limited cost. In simple terms, this framework supports lean innovation which requires the simultaneous pursuit of customer, product, and business model development in an iterative process in the context of a build-test-learn loop. The result, when properly implemented, can provide a minimum viable business model supporting the exploitation process for a newly developed product.

Based on this approach, ENPC organised the 1st exploitation workshop in view of transferring the necessary business know-how to the partners and explore together different business opportunities focused on the I-BiDaaS solution. As a result of the workshop, the consortium identified five joint business models to be further developed in the last year of the project. Furthermore, leveraging on the dynamic business model, individual exploitation plans were developed and presented in Deliverable 7.6 of the project.  These business models enable the identification of potential I-BiDaaS products linked to actual market needs, given their capability to address different stakeholders in the market. Possible products’ targets include indicatively non-IT SMEs, large companies, academic institution, as well as Data harvesting companies.

Currently, I-BiDaaS evolves, and transitions from the concept phase to tangible results and concrete outputs, and in this respect our Data providers are ready to share their experiences and stories from the implementation of the I-BiDaaS solution. 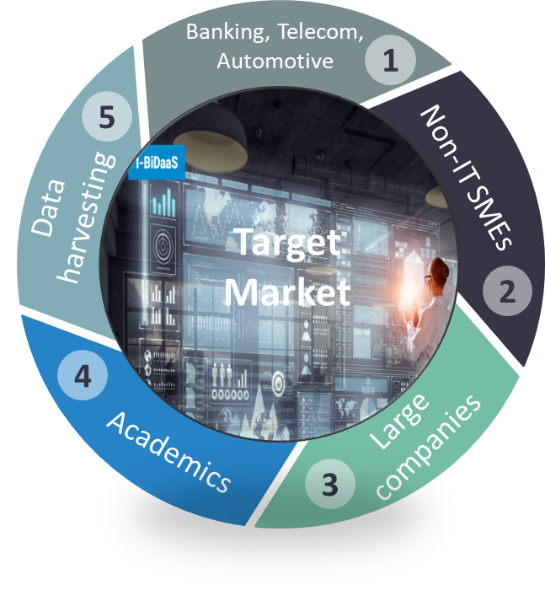 Sharing these contentful stories with our stakeholders and the general public is the next step for the I-BiDaaS exploitation & dissemination activities and the first step towards the definition of a condensed business plan for I-BiDaaS services as a final product for its commercialisation in the Data Market.

For more updates on the project, please follow us on our different social media channels (Twitter, Linked In, YouTube) or send us a message directly here.

Final implementations of specific components for all BigMedilytics pilots